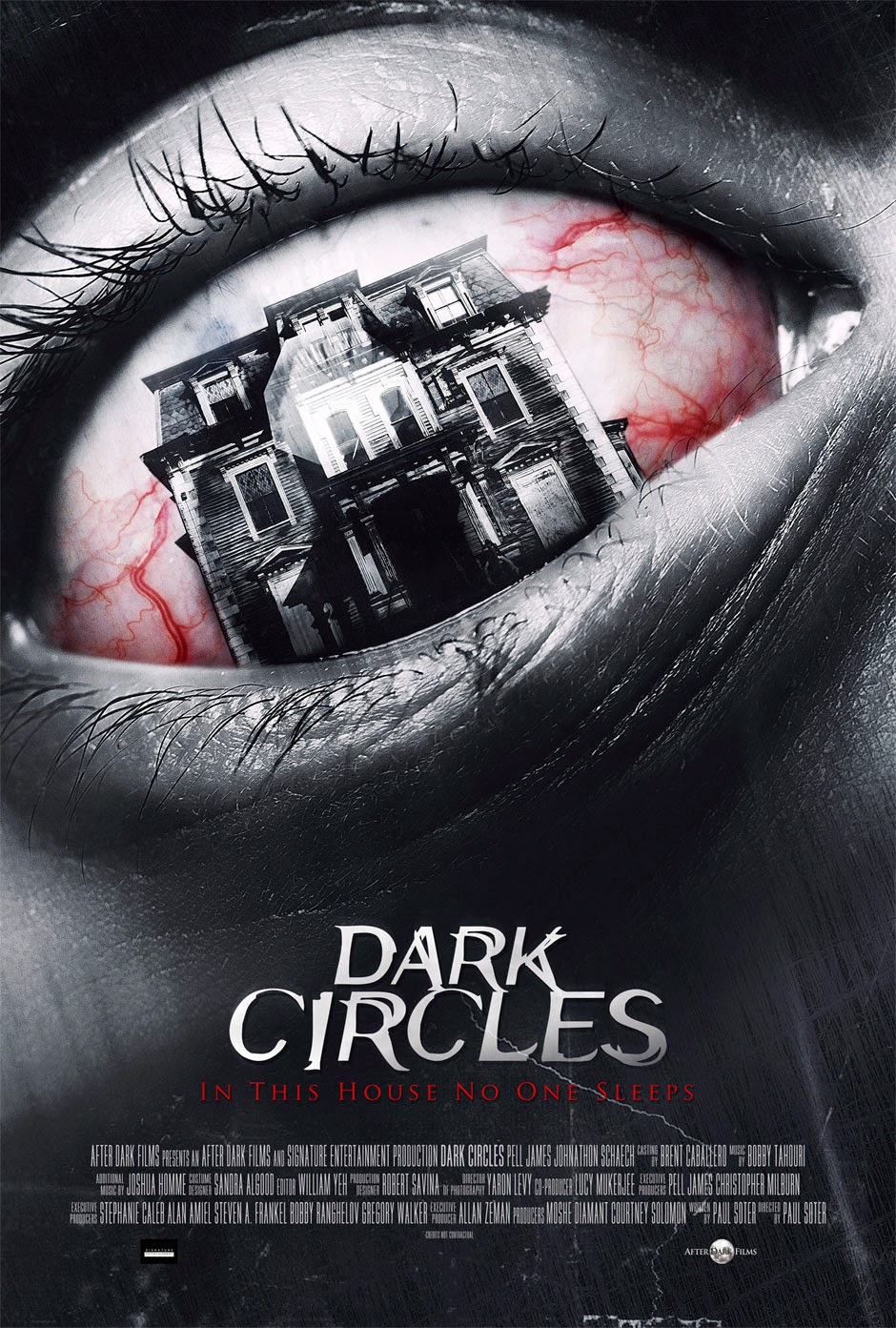 I was expecting to not like this film.
Sometimes it’s not that great to get what you expected.
Plus I’ve got eye strain from rolling my eyes every two minutes when a “scare” beat was sprung.
It’s an 87 minute movie.
That’s a lot of eye rolls.
Forty-three and a half to be exact.
I tried to alternate the direction I rolled them in so I wouldn’t build-up the muscles on one side of my eye more than the other but unfortunately I’m a creature of habit and I always roll left to right.
I just tried rolling them right to left and although I managed the trick it kind of hurt.
This introduction was more interesting than the film I’m about to review.
I’m sorry to serve desert before dinner but it’s true.
Now you know and can go on with your lives.
Oh, you want to know more about what made this film such an unsatisfying experience?
Guess it’s my job to tell you.
I’ll try to make it as painless as possible and it will take much less time than subjecting yourself to the film, unless you’re the stubborn type that thinks to themselves “You’re not the boss of me! I don’t care of you didn’t like this movie! I’m going to watch it all the way through just to spite you!”.
Fine. Be that way.
But you’ve been warned.

Let’s get this out of the way right at the beginning.
I’m going to spoil this movie for you.
Consider that my spoiler-spoiler so that it’s not a surprise when I spoil it for you.

The movie starts off with a dream sequence.
That’s your big idea.
Wait.
That’s your big idea?
I can imagine the screenwriter, coincidentally also the director, okay, writer/director Paul Soter, writing the screenplay and saying to himself in his inner voice “I know how I’m going to fuck with the audience. I’m going to start the whole thing off with a dream sequence because that’s a solid narrative decision and will certainly lock the audience in for the rest of the film.”.
“Of course!   Great idea!”, said nobody that ever knew anything about screenwriting ever.

Back in reality, the lead characters are revealed to be a handsome jazz musician and his pretty pregnant wife.
They’re hanging out with their smarmy friends and then BOOM! LABOR! BABY!
And then the baby’s like two months old and they’re moving out to the country.
Thankfully this is a horror film fan’s horror film because most of the people that are horror film fans are prosperous musicians and stay at home mothers so the characters are totally relatable.
Actually, once they move out to the country they both kind of just stay at home and stagger around looking exhausted.
Must be nice.
I mean the “stay at home being wealthy white people” part, not the “staggering around exhausted” part.
Their major problem is that their baby wakes up every fifteen minutes.
I can totally imagine where the idea for this film came from.
You have a baby, it keeps you up a lot as babies are prone to do.
You get sleep deprived which makes you a bit loopy and wouldn’t it be interesting if…
I know that one of the first rules of writing is to write what you know, but I wouldn’t presume to try to write a screenplay about a guy that stays inside and writes horror reviews.
I live that life.   It’s not really that interesting.
Also not interesting is a movie about people losing sleep because of their baby.
Yes, I know, it’s not a movie about that.   It’s a “haunted house/ghost” movie.
At least I thought it was.    But it’s not.   I kind of wish it was.
But it’s not.   It’s worse than that.   Read on.   You’ll see.
As the synopsis reads “Alex and Penny are sick of the hectic city life and decide a move out to the country to raise their newborn child. But they don't expect the horrors threatening their relationship and family.”
So, the husband, sleep-deprived goes on a supermarket run and hires the check-out girl as a babysitter.
And the check-out girl is totally not a stereotypical one-dimensional glib emo-type caricature of a character with a pink streak in her hair.
Oh, wait, she totally is.
When this caricature of a character dies, I’m fairly certain not a single fuck was given.
I knew that I was fresh out of fucks to give.
Trust me, I checked.

Then nothing worth mentioning happens for a long while and I check my Facebook notifications and my e-mail every five minutes like something awesome is going to magically happen.
It never does.   Well, sometimes, but not as often as I would like it to.
At least no celebrities died today so I don’t have to see everyone write their own status update about the dead person like they always gave a fuck about the dead celebrity like they probably would have posted about that person today anyway if they hadn’t found out that they died.
Oh, wait, an hour and twelve minutes in the ghost kills their smarmy unlikeable friend from the beginning.
Oh shit!   It’s not a ghost!   There’s a lady hiding underneath their sink!
Thankfully the film ends with an expository voice-over that explains who the lady under the sink is and why she’s hiding under the sink.
Because if you’ve done your job as a film-maker you need an expository voice-over at the end of your film to sew up the holes not only in the plot, but in the very premise of your film.

Let me try to say something positive.
I’ve been told it’s important to say something positive about a film if you can think about anything positive to say.
What I can say is that the actors were not unnecessarily presentational in their performances, which is somewhat amazing considering some of the awkward dialogue they have to deliver.
The film is also solid visually.   It is a relatively well-made film that I wish was not made.

Two of the major problems with the film are the dialogue and the story.
We already dissected the story.
The dialogue is by turns, glib and predictable and completely unnecessary.
I don’t expect everyone to reinvent the art of dialogue every time they write a screenplay, but when you’re just putting words on paper to get your characters from one event to another it’s unfair to your intended audience to expect them to be able to invest in the film.

Another major problem is the soundtrack.
The soundtrack would be funny if it wasn’t so bad.
It’s like the parody of a horror movie soundtrack.
Something you might not know about me is that I make electronic music.
Okay, I dabble, and every now and then my dabbling ends up as songs that I post on the internet for nobody to listen to ever.
To facilitate this self-indulgent dabbling I downloaded every “sample pack” I could get my piratical little hands on.
Included in these were a few “movie” sound packs.
And included in those sound packs were the samples to make every generic horror movie sound effect ever.
Backwards cymbals and piano tone chords and rubbed cymbals and metal crashes and clangs and startling percussives.
Every “scare” beat of this film is accentuated by two or more of these effects layered into what I would call a “startle hit”.
Is it frightening?   Nope.   Not one bit.
Is it startling?   Sure is.
In the same way that when someone sneaks up on you and yells “BOO!” in your ear is startling.
So if that’s the kind of horror movie that you’re into, then this is the film for you.
That and if you give a shit about babies or people with babies or superficial emo cashiers.

I’m not going to be a jerk and say that Paul Soter should stick to making comedy movies like Super Troopers (2001) with the guys from Broken Lizard, because after Super Troopers those films abruptly proceeded to deliver diminishing returns.
That guy’s got every right to make as many horror movies as he wants to as long as he can find someone willing to give him the money to make them.
Just as much as I have the right to illegally download and watch them and give them bad reviews.
I know some of you may be thinking, “Hey! That’s not right!” and I guess you’re right to say so.
Okay, you win, I promise to never watch another horror film made by this writer director.
Happy now?

As I often say, the film wasn’t totally unwatchable because the director was successful in telling a story using dialogue and a succession of still pictures simulating motion.
It’s a movie.
But not a good one.
And not one that I can recommend in good faith to anyone except a couple that is suffering from sleep deprivation as a result of having a baby and I tend not to talk to them very often because I always take them out of my News Feed as soon as the baby is born because I know that the next five years is going to be nothing but bullshit updates about their baby.
At least all I’m out is the time it took to watch the film.
I’d say I was out the time it took to watch the movie and write this review, but after that first dream scene and my first eye roll, I knew that this one was one I could easily write the review for while watching the film to maximize my efficiency and I was right.
Sometimes it’s kind of nice when things work out the way you expected them to work out.

By the way, here’s a pro-tip.
If you have a baby, create a Facebook for the baby right away and post all of your baby progress and baby pictures and baby-baby-baby bullshit on that page that way I’m free to ignore all of it and still be your friend, and keep you in my News feed, even if we’re only imaginary friends via social media.
You’re welcome.
Posted by Scott Lefebvre at 7:00 PM