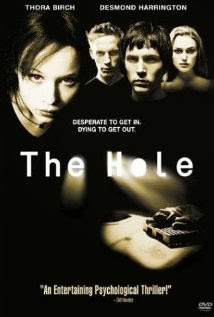 The Hole (2001):
The IMDB synopsis reads as follows, “Four teenagers at a British private school secretly uncover and explore the depths of a sealed underground hole created decades ago as a possible bomb shelter.”
That is not what this film is.
The Hole is as much the preceding synopsis as Taxi Driver is a story about a man that drives a taxi.   The synopsis is the device that puts the characters in a situation for dramatic events to unfurl.
What The Hole is, is a riveting contemporary reimagining of Rashomon (1950).   Not that this is a samurai drama in the tradition of Akira Kurosawa.   I love samurai movies, when done well, but this is not that.   The Hole uses the central thematic mechanism from Rashomon, a story told from the varied perspectives of the lead characters.   Surprisingly, for such an ingenious device, it is infrequently used in contemporary films aside from expository flashbacks revealing to the audience information that they as the omniscient observer are privy to which the characters in the film are otherwise unaware of.
The Hole is able to accomplish the rare feat of presenting us with several perfectly believable scenarios, each more believable than the last.   As each scenario was presented, I was completely invested, and as each new scenario was presented, I was completely invested in that one until the final scenario is revealed, wrapping up the storyline and bringing the film to an unanticipated resolution that was truly satisfactory which is rare for me as a film enthusiast.
The film doesn’t break any new ground visually, but it doesn’t have to, as the scenarios carry the film without requiring any cinematographical acrobatics.   The film is well made visually, competently, if not artfully composed and edited and the artifacture of the film doesn’t distract the audience from the experience of the film as sometimes happens when a Director of Photography is too ambitious in demonstrating their ability to accomplish amazing cinematographical acrobatics.   There are some beautiful shots though.   The reveal from the p.o.v. from inside of the titular hole is particularly noteworthy by way of composition.
The performances are all solid, which, again, is surprising for such a relatively young principal cast.   They’re not breaking any new ground in the world of acting, but, again, they don’t have to.   What matters is that they are able to make the psychological adjustment to perform essentially different characters psychologically in several different scenarios, demonstrating a range that is rarely exhibited by the stable of “young talent” inflicted upon us by mainstream American films these days who, for the most part, can’t even portray one role convincingly, much less portray psychological changes in the characters they portray.
If there was a conference for “young talent” in Los Angeles and the building burnt to the ground with everyone trapped inside, essentially rebooting the contemporary trend towards presentation over verisimilitude exhibited by any and every young actor of our time, it would do much to increase my optimism for future mainstream films utilizing young actors.
In summary, The Hole is an excellent film that you’ve probably never seen and you should fix that as soon as you can.   Plus you get to see Keira Knightley’s boobs, which was not much of an incentive for me, as I’d have preferred to see “more” of the wonderfully voluptuous Thora Birch, but if getting to see Keira Knightley’s underwhelming rack is what tricks you into watching an almost perfect film, then, by all means, do. 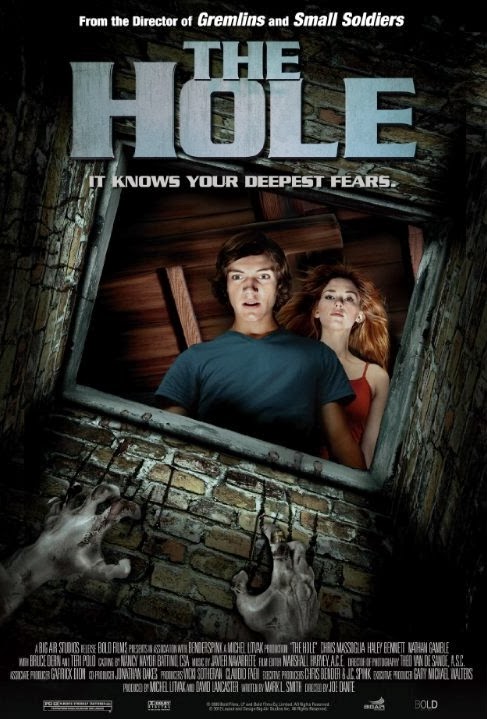 The Hole (2009):
A single mom moves her two kids to a new home.   One is a moody black-haired teenager and the other a plucky little blond boy.
And I already hate this film.
The last film I remember giving a damn about where a single mother has to deal moving to a new town and raising two boys is Lost Boys (1984) and that one had the Coreys and vampires and Kiefer Sutherland as a vampire and was and is awesome.
In this one, all they’ve got is a trap-door in the basement with a bottomless hole in it.
The hole doesn’t even conjure up claymation mini-demons like The Gate (1987).
In the scene introducing the boys, the moody teen is listening to headphones, while eating pizza, and wearing a “Killers” t-shirt.   If it was a parody, his shirt would read “Angsty Teen” in distressed 1970s iron-on style.
There’s a girl next door.   Her parents are affluent enough that they have an in-ground pool in their backyard so the pretty young object can have her jerk-off friends over to lounge around and be jerks.
Of course the pretty girl next door decides to befriend the new kid next door.
Of course she does.
The teenaged boy and girl hang out in a vain attempt to develop their one-dimensional characters.
Then I stopped paying attention because it was boring.
Then the younger brother goes into the basement alone and is menaced by a clown puppet.
Because everyone forgot about the time that they used that trick in Poltergeist (1982).
Thankfully they replace the clown puppet with a creepy little girl when the big brother goes downstairs to check up on his little brother’s report about the clown puppet.
Oh, and there’s also a notepad that when you tear all of the pages out and assemble them it makes a picture like in Kiyoshi Kurosawa’s Pulse (2001) or the American remake from 2006.   I forget which.
There’s a police officer that shows up supposedly looking for the little girl ghost, and when he turns around he reveals a yawning head wound, like in The Sixth Sense (1999).
We enter the third act with the younger brother getting lured into the basement by himself and being menaced by the clown puppet again, this time the puppet plays like the goblin from Cat’s Eye (1985).
Don’t worry.   The angsty teen lowers himself into the titular hole and confronts his fears by fighting his father.   Like in The Empire Strikes Back (1980), except the scene plays like a Scarecrow dream sequence from the video game Arkham Asylum.   But in a bad way.
It turns out the whole thing was because Herbert West stole the tall man’s phantasm ball and gave it to Pinhead who used it to resurrect Jason Vorhees and Freddy Kreuger and Michael Myers, so Ash had to quest for the Necronomicon with Sid Haig and Bill Moseley.
Yeah, right, I wish.
Quotation may be a serviceable substitute for wit as Oscar Wilde was attributed with saying, but theft of other people’s ideas is not a serviceable substitute for creativity and the director should be ashamed of himself.
Pretty much it was as if the director decided to re-make Umberto Lenzi’s Ghosthouse (1988), peppering in elements stolen from other horror films in the hopes that by tossing it all in a blender and spreading it thinly across three uninterestingly average and under-acting young people it will work.   It doesn’t.   Not on any level aside from frustrating and annoying its intended audience.
The film relies almost exclusively on startle-scares, where a character is suddenly confronted by something as indicated cinematically by a smash cut and an audible sting.
This is the lowest possible form of horror.   I would rather be grossed out by gore than deal with someone trying to scare me by showing me someone being startled and kicking a piano every five minutes when a scare beat is determined to be necessary to keep the audience interested and insure that the film earns its horror genre tag.
I tried to watch this about five times, and fell asleep every time until this, the sixth and hopefully final time.
Keep in mind this travesty was directed by Joe Dante, the guy that gave us The Howling (1981) and Gremlins (1984).   So pretty much I feel like I took a trust fall into a pile of broken glass and used syringes thinking that Joe Dante was going to catch me in his capable hands.
The only nice things I can think to say is that it is a movie in the conventional sense that it’s a piece of media that tells a story using pictures and sound and it would be great for people that don’t like movies that scare them but love movies where adolescents do a poor job of acting and the adults don’t do much better.

Posted by Scott Lefebvre at 5:35 AM