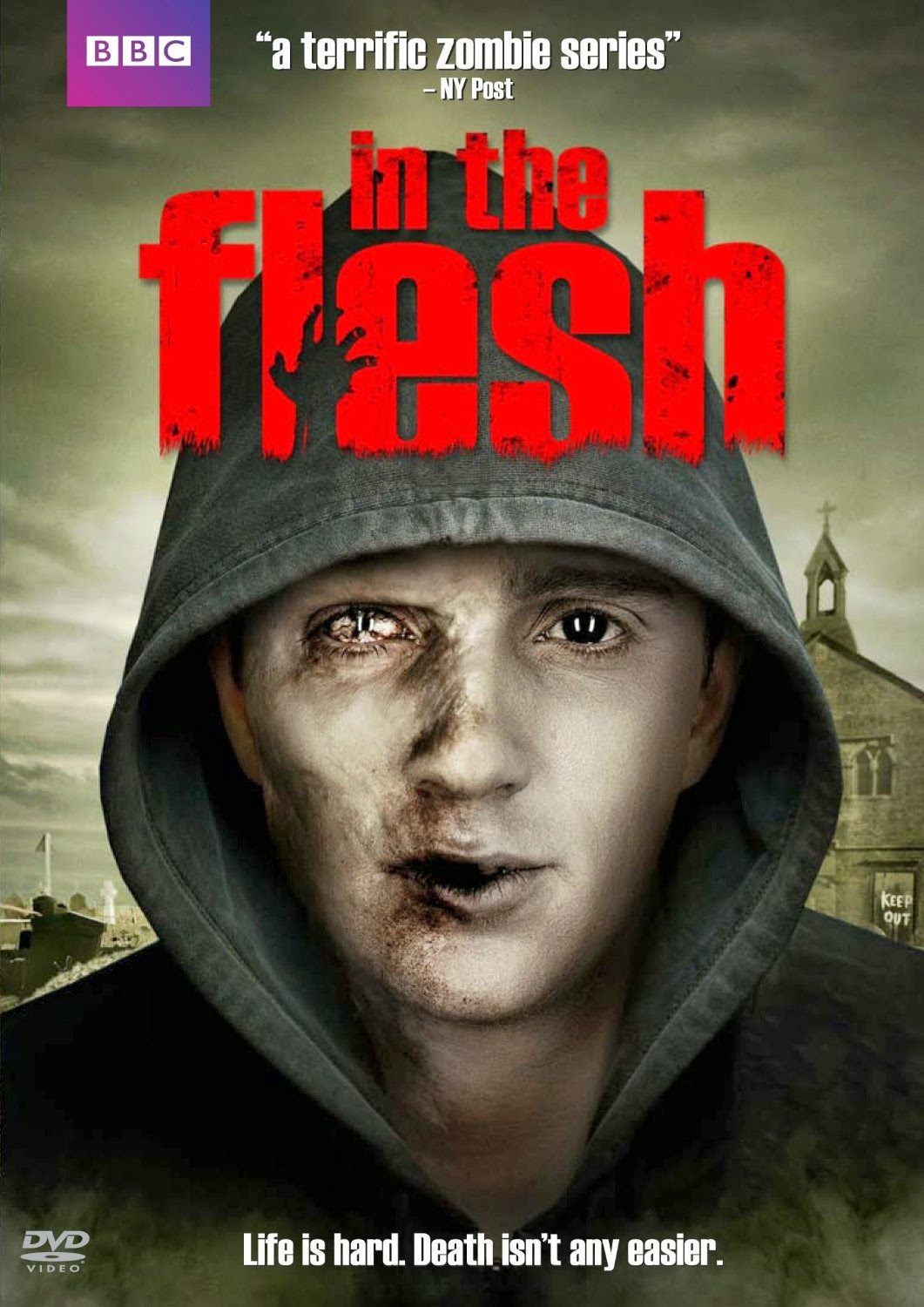 In The Flesh is a UK TV series that explores what happens when a temporary cure for the disease of being a zombie is discovered.
This series is far from the first to explore this theme.
Among the films that predated this series exploring this theme are:
Les Revenants  / They Came Back (2004) www.imdb.com/title/tt0378661/
Deathdream / Dead Of Night (1972) http://www.imdb.com/title/tt0068457/
Fido (2006) http://www.imdb.com/title/tt0457572/
And even Shaun of the Dead touched on the theme at the end of the film.
There are other films that explore this theme, but this isn’t intended to be a comprehensive overview of the theme of reintegrating zombies into the society of the living.
The IMDB synopsis reads as follows: “Four years after the Rising, the government starts to rehabilitate the Undead back into the society including teenager Kieren Walker, who returns home to his small Lancashire village to face a hostile reception as well as his own demons.”
And it is that, but mostly it’s a situational drama.  Your usual “fish out of water” story.
The main driving elements are the central character Kiernan Walker, (Get it? “Walker”!) dealing with his family.  You see, his younger sister, a stereotypical troubled teen is *gasp* a member of the zombie-killing militia, known as the Human Volunteer Force / HVF.  It’s a bit contrived.
The whole series is a bit contrived.
The inter-relationships of the characters is crowded and forced.
The main HVF character coincidentally has a son that returns from the middle east conflict as a
Partially Deceased Survivor, which is what they use in lieu of zombies for this series.
One interesting development, and the only real character that caught my intention is *SPOILER* Kiernan’s zombie girlfriend who he meets at a graveyard.  She’s genuine, believable, and totally commits to her role, presenting the only full-actualized character.
My biggest problem is that the Partially Deceased Survivors, oh, fuck it, let’s call them zombie, are dead.  If they had gone the same route as 28 Days Later and they had been rehabilitating “infected” the premise would be a bit easier to suspend my disbelief over.  But dead bodies have a particular odor to them.  Without consuming any kind of nutrition, the dead should continue to waste away until they are gaunt.  Also, if a body isn’t cremated, it’s usually embalmed, so that’s an interesting problem that the series fails to really address.  I could put all that aside, and if the plot, writing, and performances were all better, I’d probably be looking forward to seeing how the rest of the series played out.
I watched the first three episodes which seems like all there was available to torrent at this time.
The strength of this series should be the characters and characterizations.   The main characters take turns over and under-acting their roles and the only believable performances are rendered by the supporting characters, which only serves to accentuate the flaws in the performances of the leads.
When it’s not belaboring the coincidentally close upon the verge of being incestual inter-relationships or the characters, it dabbles around with death imagery and metaphors like coffins and graveyards and skulls and skeletons and what have you.  I get it.  You’re trying to make a statement about life and death and mortality.  But if you’re going to do that, then first you should lock down the performances of your actors.
It doesn’t help that the entire thing has been filtered through a dirty dishwasher filter which does nothing to enhance the cinematography which is otherwise relatively well executed.
Overall, as it is, it’s a sub-par exploration of an interesting idea.
Posted by Scott Lefebvre at 6:24 PM No comments: